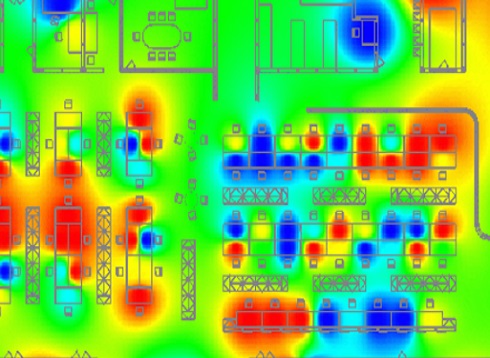 Access control systems are designed to secure a building on a layered zone basis and have traditionally worked in isolation of other building systems. The latest trend is to use the information to provide population-related data that can be used in rules-based algorithms to help organisations improve their energy efficiency and productivity.

‘Access control’ is a way to grant or deny permission to enter or exit a building, zone or room based on the presentation of a pre-defined credential to a reader.

A credential is an access control ‘token’ that defines where the holder can go (either entry, exit or both). When presented to a reader, the credential is checked to a database of users and permission is either granted or denied. If granted the door controller unlocks the door.

The primary access control system developed and supplied by Remsdaq is the Entro series.

The Entro access control series provides a complete eco-system with which to secure and protect a building and the people and physical assets within. The range consists of:

The Entro series was the first access control system in the world to incorporate native BACnet as a communications protocol.

BACNet stands for Building Automation and Control (BAC) networks and was designed to allow communication between and from building automation and control systems from different manufacturers. The BACnet protocol was developed by ASHRAE (the American Society of Heating, Refrigeration and Air-conditioning Engineers) and is commonly used to integrate and co-ordinate systems within a building management system. For further information see ANSI/ASHRAE Standard 135-2016 or ISO standard ISO16484-5:2017.

BACnet defines standard ‘Objects’. Each object has a standard set of properties that describe the object and its current status.

As a native BACnet enabled product, the EntroStar and EntroNet door controllers are defined as BACnet Advanced Application Controllers (B-AAC) and incorporate several BACnet objects. The objects include:

To monitor one of the door controllers means to subscribe to a specific access control object or set of objects available from the BACnet enabled door controller. The subscribing device may be part of a building management system or some other form of middleware software. The collected information may be a ‘state’ or value to which rule-based algorithms can be applied based on the monitored property or properties.

A layered zone approach is a way to provide levels of security for a building. The outside of a building could be classed as ‘Zone 1’. A door controller could be installed with two readers (one either side of the door) allowing entry or exit (to the building) after a credential was presented to the reader.

Zone 2 could be set to inside the building. Other zones could be configured to map out specific areas requiring varying levels of access control i.e. offices, IT rooms, archives, stores, reception areas, meeting rooms, production areas, laboratories, development and engineering offices.

The Entro Access Zone has 33 properties that can be read to provide information on occupancy levels including:

Monitoring the above properties and changes to them, it is possible to monitor the number of credentials within a zone and the time they entered or left the zone. Each credential has a unique user and a user can have more than one credential i.e. a card, key fob, biometric finger print and/or pin code. Referring to the Access User object further information can be obtained. The User_Name property ties the credential to a specific user. Others within the Access User object include Member_Of where the user belongs to a defined group member.

RTE are general in that they can be push-buttons or hand gesture readers that do not check a credential before a door is opened. RTE devices cannot therefore be used within Zones where people movement is to be recorded.

A ‘smart’ or ‘intelligent’ building is a structure that uses automated processes to automatically control the operation of the building in terms of heating, ventilation, air conditioning, lighting, security and other related systems. The building is ‘smart’ because it can make rule-based decisions based on information collected through sensors and from systems.

BACnet enabled devices can be one such information source. Using the information from an Entro type access control system allows the building management system to:

For those zones without access control, other technologies can be integrated including area-related headcounts using CCTV systems and blue-tooth beacon technologies. The latter relies on the access control credential being carried in a battery powered, blue tooth enabled card holder.

The primary function of an access control system is to protect a building through controlled entry and exit to authorised credential holders. Integrating the usage information from such a system into a smart building automation solution provides several energy saving and carbon reduction benefits and helps to improve the ‘wellness’ of the building environment.  Wellness is an emerging topic and one that building users are placing an ever growing importance on.

As reported in Smart Buildings Magazine covering the recent British Council for Offices (BCO) report, ‘Wellness matters: heath and wellbeing in offices and what to do about it’ (1), is a case in point. Less than half of respondents felt that their workplace was having a positive impact on their health, whilst 17% indicated that their working environment could actually be diminishing their personal wellbeing. And with the Health & Safety Executive reporting that 25.7 million UK working days were lost to work-related ill-heath during 2016 and 2017 alone (2), it is evident why so many public and private sector organisations are expressing concern.”

Using BACnet enabled access controllers such as the Remsdaq EntroStar and EntroNet can not only improve building security but can also help to lower  lost working days and help an organisation to reduce its carbon footprint. The savings are based on using the data from Entro series system to population and access information which can be used to compute rules-based algorithms and help to identify changes in a building’s energy profile.

As Internet of Things (IoT) and access control devices develop, the time may come when both credentials and beacons become embedded into workwear and wearables. Developments like this will further help to make the integration of access control data into smart building operations a standard feature rather than one lead by innovators in the industry.